JANUARY 3, 2019
If you're planning a trip to Atlanta, Georgia soon, one of the best resources for information is the Atlanta Convention & Visitors Bureau (ACVB). With nearly 53 million visitors experiencing Atlanta and spending $15B while there, the ACVB has a monumental task of helping guide visitors to reputable resources and services. Their mission is to promote the long-term development and marketing of Atlanta’s convention sales, tourism marketing, and service.
At the 3D Map Videos Channel, we are working hard to partner with many convention and visitors bureaus to help them tell neighborhood stories better. So I am on a new mission to stop by and chat with many of the best CVB across the country and chronicle my journey! Thanks for taking time to talk with me Atlanta.net! Their website is www.Atlanta.net

I Needed 3D Map Videos for my First Trip to Boston's NAR Conference!

NOVEMBER 2, 2018 - BOSTON, MA
The idea of 3D Map Videos wasn’t even two weeks old when a trusted business associate of mine and I were having a exhilarating conversation about our startups. I know a few people that are gagging right now because I said a startup conversation was exhilarating (LOL). But we are both starry eyed entrepreneurs with boundless visions and endless dreams, so you could bet the conversation was filled with a lot of ‘We’re doing this’ and ‘We’re working on thats’. However, I do recall Silicon Valley was mentioned a couple times during the exchange. How can you talk about startups and not say the words ‘Silicon Valley’ in the same sentence? My associate caught me off guard when he said, “With an idea like this, you’re definitely going to be at NAR 2018 right?” And like many folks who answer an unfamiliar question as if they know what the other person is talking about, I said, “I hope so!” So when I got home, I jumped on Google only to find out that NAR (National Association of Realtors) was the largest annual conference for Realtors across the country. At the time, Realtors were my primary target market. So I absolutely had to get to Boston for NAR!

As it turned out, my associate had a booth at the event and invited me to join them in their space. And attending the NAR 2018 conference proved to be a game changer for 3D Map Videos. First, it helped prove the value of the concept as every agent I spoke with was impressed with the idea of seeing what’s located near their listed properties. But secondly, I realized that their was also a need for the conference itself. It was my first trip to Boston and I wanted to know more before travelling. I couldn’t find exactly what I envisioned as a resource, so I created one.
Check out the end result: https://youtu.be/cdRu2gPZ1Fo

It really helped me understand my trip to Boston better and what to watch for!

Before Siri, there was Me!

OCTOBER 15, 2018 - ATLANTA, GA
Pre-smartphone travel was a lot different than it is today. There weren't ipads, iphones, TVs and mobile movie theaters to aide in the long, exhausting and mentally draining hours spent on the highways. We had to find ways to entertain ourselves while, whomever the designated driver was, tried not to fall asleep or get pulled over for driving over 55mph. Back in the 80's, we respected the 18-wheelers a bit more than they do today. They were the fastest on the highway... and we usually waited for a semi to come speeding up from behind and we'd follow them for as long as we could keep up. Now a days it seems like the 18-wheelers have to move out of the way for even Toyota Priuses.

I remember many interesting road trips with my family! If we ever meet (yes you the reader), be sure to ask me to share some of the daunting or hilarious stories from some of our journeys. As kids and teenagers, we had to pack up as many entertaining items as we could find to help pass the time, including cassette tape players, snacks and a pillow. Sleep was the most popular activity during the very long trips!

However, as a kid, I was that one who loved maps and studied them at night. Yes, I mean the printed maps that used to be at every store and gas station. I remember the longer trips with my family (e.g. Florida to Michigan) when I was armed with my maps in the back seat. And like Siri, I was yelling out what we should see next around the bend. I read the highway signs and counted the mile markers (if I was awake :- ) I was the Pritchett family navigation system. Well, sometimes I was. You know 'Dads' have to know everything and mine was no exception. Even until we went flying off a paved road in the dead of night and landed on a dead end dirt road surrounded by parked cars... (yes, just like a movie!). Well, we made it through that ordeal or else you wouldn't be reading this. I remember my Mom and Dad saying, "That boy knows those maps!"

So you can imagine the joy I get out of exploring maps on smart devices. I've been around the world and back using Google Maps! Thanks Google. However, with technology advances, I've discovered a way to share my virtual journeys using a mix of 3D and videos. Every map has a story to tell and a flat map just doesn't say enough. So I launched 3D Map Videos in October and decided to target the Real Estate industry as I am an experienced marketer in the industry now. So I hope you all find our 3D Map Videos entertaining and informative!

HOME
ABOUT
HOW IT WORKS
GET A MAP VIDEO STARTED 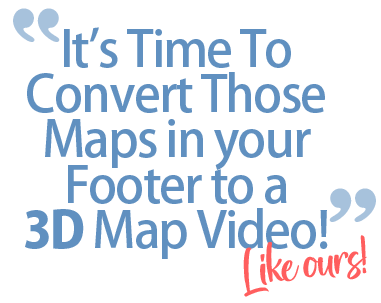 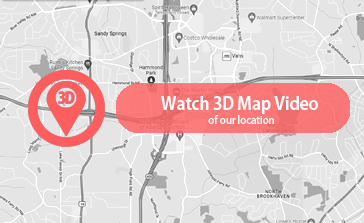